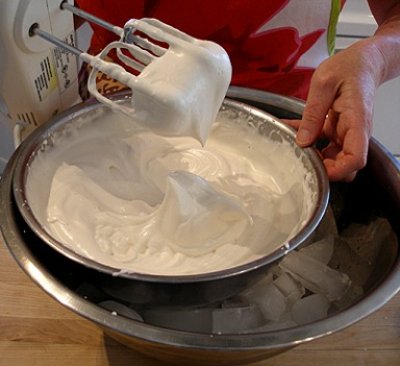 You want a dollop of sweet, fluffy whipped cream on your dessert, but aren't willing to dive into a bowl full of fat and calories, make this delicious deceiver. To my taste, it blows those imitation whipped cream toppings out of the water. This recipe has been around a long time and I updated it. It's based on one from the 1946 Joy of Cooking Cookbook that regularly used evaporated milk (probably because of wartime rationing), but I use skimmed evaporated milk to reduce the fat. Gelatin stabilizes the whipped cream so it won't deflate. Serve it within an hour of making. We use this recipe with our Raspberry Cloud Cups with New Whipped Cream.
FROSTING, ICING, ETC RECIPE HELP / LOW / REDUCED-FAT RECIPE HELP

INSTRUCTIONS
1. In a small bowl, add the gelatin and sprinkle cold water over it. Let stand until the gelatin absorbs the water, about 5 minutes. 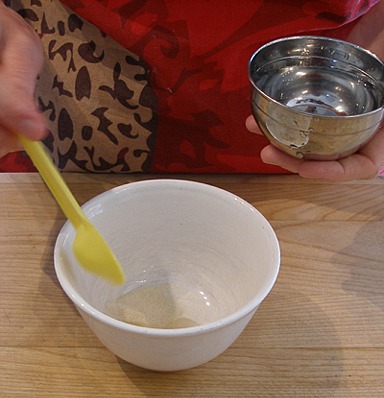 2. Meanwhile, in a medium saucepan over medium-low heat, scald the evaporated milk.
To scald: place milk in a heavy-bottomed pan on low heat. Stir occasionally until the milk is just hot with steam and small bubbles appearing around the edge; do not boil. 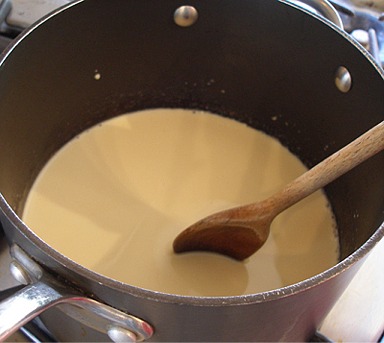 3. Remove from the heat and add the gelatin. Stir well until the gelatin is completely dissolved, at least 1 minute.

4. Stir in the sugar, vanilla and almond extract, until the sugar dissolves. 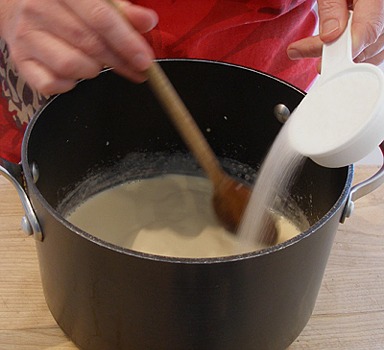 5. Refrigerate, stirring occasionally, until chilled, about 1-1/2 hours.
SARAH SAYS: You can optionally place in a freezer for about 45 minutes, or place the bowl in larger bowl of ice water, and let it stand, stirring often, until chilled.

6. Using a handheld electric mixer set at high speed, beat until the mixture is thick and fluffy. Use immediately, or refrigerate for no more than 1 hour. If mixture separates, beat again until combined.

STORAGE
Store, well covered in the refrigerator for a day or two. Rebeat by using a hand-held whisk.