Premium Member kjz wrote me: "Down in New Orleans the Mardi Gras season is in full swing. A major food of the season is King Cake. I was wondering if Sarah if you had a recipe for this? I made 2 of them over the weekend but I thought mine was too dense and dry. I am work now, but when I get home I will send you the actual recipe if that would help?
I have ordered them from Louisiana and remember them being lighter in texture than what I created. I have enclosed a picture of mine. It was cream cheese filled, but I know it could be better with the right mixing and or recipe. Thanks---Kent"

Cake and photo by Kent © Sarah Phillips
SARAH SAYS: So, I offered to invent a recipe for him! Find out how I did this!

THE RESULT: "Sarah, I made the King cake using your recipe yesterday and that was the best king cake I have ever eaten. It was moist and not dense at all. The whole cake was eaten at one sitting last night by family. I thought I might have a little let to eat this morning with coffee but alas no cake! Instead of the traditional filling I decided to use cream cheese with other ingredients. Needless to say this recipe rocks!"

Thousands flock to New Orleans for the annual Mardi Gras celebration: days filled with parties, costumes and, most importantly, great food. If you can't make it to what some have called "the greatest free show on Earth," you and your family can bake a slice of the fun at home by making this traditional Mardi Gras delicacy that has an interesting story behind it. In every office break room in New Orleans from Epiphany (January 6) to Fat Tuesday at the end of February, there's a half-eaten king cake: a gaudy-looking coffee-cake-type ring covered in purple, green, and gold sprinkles, the official colors of Mardi Gras. Somewhere inside, there's a little plastic baby, and whoever gets the slice that contains it has to bring in the next cake or throw the next king cake party.

For most of its modern history, the king cake has been a plain braided brioche dough, not terribly sweet, unfilled (except for the bean-turned– plastic baby), with only a dusting of colored sprinkles on top. However like New Orleans itself, the king cake has become anarchic and wildly creative. Innovations in the last 30 years include thick frostings, cream cheese and fruit fillings, “Zulu” versions (named in honor of the historic black Carnival krewe) with chocolate and coconut toppings, and giant doughnuts. One New Orleans bakery even makes a king cake filled with goat cheese and green apple.
BREAD RECIPE HELP

To create a Mardis Gras King Cake, I used the base dough from my Fluffy, Buttery Cinnamon Rolls or Buns Recipe, which I altered for this recipe. The original recipe is light and fluffy and very easy to work with, which is just what I wanted! It is also Brioche-like, which is rich, tender and buttery, just like the traditional King Cake recipes. A plain cinnamon filling is also traditional. The resulting recipe posted here was a success!

INSTRUCTIONS
STEP I: MIX THE DOUGH
1. Rinse a medium size mixing bowl with hot water to warm it. Place the measured warm water in the bowl.

Sprinkle the yeast over its surface and let stand for a few minutes. Whisk the yeast until it has fully absorbed the water.

Add the honey to the yeast and stir. It will start to bubble a little.

Immediately add in the warmed milk and stir.

2. In the bowl of a standing electric mixer fitted with the paddle attachment, beat in the butter with the sugar and the salt at medium speed until light and fluffy.

With the mixer on low, beat in the eggs, 1 at a time, until blended.

Turn the mixer on low, and add in 2 cups all-purpose flour in 1/2 cup increments until combined after each.
SARAH SAYS: This step is very important as you will start to develop the gluten in the bread, for a well-risen dough.

3. Beat in the yeast / milk mixture slowly at the side of the bowl with the mixer on low. It will be very bubbly at this point.

5. Gradually add the remaining 2 1/4 cups of flour and beat at medium speed until a soft, sticky dough forms, about 5 minutes. After 1 cup of flour is added, beat in the nutmeg and lemon peel and resume adding in the rest of the flour.

2. Take the dough from the dough hook without pulling at it so it tears. Do not break it into small pieces, either. Scrape the dough into the greased mixing bowl and cover with plastic wrap, greased side down.
SARAH SAYS: When washing a bowl used for mixing bread dough in, use cool soapy water, not hot water, to prevent hardening the flour mixture on the bowl.

3. Let the dough stand in a warm place until it is doubled in bulk, about 1 hour.
SARAH SAYS: You can use Sarah's Microwave Bread Proofer.

STEP III: PUNCH DOWN DOUGH AND SHAPE
1. Punch down dough.

2. Roll into a large rectangle, about 30 inches long and 6 inches in diameter.

3. Spread 1/3 cup softened butter evenly on the rectangle, leaving a 1-inch border. Stir together 1/2 cup sugar and 2 teaspoons cinnamon, and sprinkle evenly over the butter.

4. Roll up the rectangle, jelly-roll fashion, starting at 1 long side. Place the dough roll, seam side down, on a lightly greased baking sheet. Bring ends of roll together to form an oval ring, moistening and pinching the ends together to seal.

After punching down the dough,
Alt 1: Roll the dough out 30 inches long and 6 inches in diameter. Brush with melted butter and sprinkle with a combination of the remaining 3/4 cup sugar and cinnamon across the center of the dough. Bring the two long edges together and seal all sides completely. Using your hands shape the dough into a long cylinder and place on a greased baking sheet, seam side down. Shape the dough into a ring. Place a well-greased 2 pound coffee can or shortening can in the center of the ring to maintain the shape during baking.

Alt 2: Sprinkle cinnamon over the top, pat and shake dough into a cylinder. Twist dough to form a curled cylinder and loop cylinder onto the buttered baking sheet. Pinch the ends together to complete the circle. Let rise. Before baking, brush top and sides of cake with egg wash (1 egg slightly beaten with 1 tablespoon milk).

STEP IV: LET DOUGH RISE FOR THE SECOND TIME AND BAKE. GLAZE AND DECORATE WITH COLORED SUGARS
1. Slide the shaped dough on the parchment paper to a baking sheet. Press the plastic baby toy (optional) into the ring from the bottom so that it is completely hidden by the dough.

2. Cover the cake with a lightly greased-side-down plastic wrap in its pan. Place in a warm place for about 30 minutes to 1 hour or until the dough is ALMOST doubled in bulk.
SARAH SAYS: You can use Sarah's Microwave Bread Proofer.

3. Meanwhile, about 30 minutes before baking, position an oven shelf in the middle of the oven and preheat it to 350 degrees F.

4. With a sharp knife, make several slits around the top of the ring.

5. Bake the Mardis Gras King Cake for about 40 to 50 minutes, until golden and risen and an instant-read thermometer inserted in the center registers 180 degrees F.

Slide the bread, attached to the parchment paper, to a wire cake rack to cool.

7. Spread the glaze on top of the cooled cake with a knife and sprinkle on the colored sugars, alternating colors and forming bands.

SERVE
Carefully remove the cooled coffeecake onto a plate. Cut the cake into individual pieces and serve.

MAKE AHEAD
The baked Mardis Gras King Cake can be covered in plastic wrap and stored overnight at room temperature. Reheat before serving

STORAGE
Wait until the Mardis Gras King Cake cools completely before wrapping in plastic wrap or a few times in foil and storing it at room temperature for a day. For a couple of days storage, store in an airtight container in the refrigerator. The baked rolls can be frozen where they will keep fresh for 1 month or more. 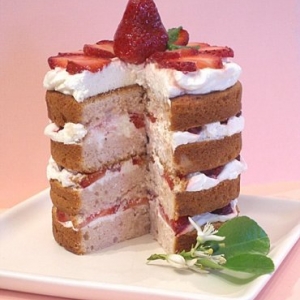 You must be a Premium Member to comment Register Now »

Get Your Premium Membership!

Eggs - Add One at a Time

Cake and cookie recipes that call for more than one egg typically call for either adding them one at... Read More

How to Separate Egg Whites from Yolk

Separated eggs are used in many recipes that use just beaten egg whites and/or yolks. Beaten... Read More

We use Kataifi dough to make a realistic looking and edible bird's nest to adorn our... Read More

Folding is a gentle mixing method; the aim is to incorporate delicate ingredients or components... Read More