Raviolis are delicious, but, you haven't tasted anything, till you've had homemade ravioli. Tender pasta pillows, filled with a delectable cheese filling...well, it just doesn't get any better than that. They are not as hard to make as you might imagine. I use a fresh pasta recipe that is mixed entirely in the food processor. It mixes up in a snap! It can also be used to make spaghetti or any other cut pasta. I have also used it to make lasagna. It is so light and tender! You need to have a pasta machine to make this pasta.

INSTRUCTIONS
1. Put flour and salt through a sieve to sift out any lumps.

2. In the bowl of a food processor fitted with the mixing blade, add the sifted flour and salt.

Add the eggs and then, the water.

3. Process the food processor until the mixture just begins to come together, taking about 30 seconds.

Check the consistency of the dough. It should be firm and just stick together when pressed between your thumb and index finger.
If it is too sticky and wet, sprinkle a tablespoon of flour over the surface of the dough. Conversely, if it is too dry, sprinkle a teaspoon of water over its surface.
Process the dough for an additional 15 seconds more.

4. Transfer the dough to a lightly floured work surface.

Knead for about a minute, to combine.

5. Let the dough rest, for 1 hour, on a floured work surface, covered with an inverted bowl or loosely with plastic wrap. This will allow the gluten to relax and make rolling easier.

STORAGE
You can make the dough one day ahead of time, as long as you sprinkle it with flour and place it in a ziptop bag. Because it has raw eggs in it, I don't think you should keep it any longer than that. Plus, it tends to get sticky when refrigerated...this makes it harder to roll out.

Push spinach down into water with tongs, so it is submerged.

2. After 30 seconds, remove spinach from boiling water and place it in a bowl of ice water.

Remove spinach from ice water and squeeze to remove as much water as possible.

When you unwrap the spinach, it should be very dry, as pictured below.

4. Place spinach in a bowl and measure out 1/2 cup, to use in this recipe.
NOTE:If you have extra, it is great to use in spinach and cheese omelets.

2. Add the grated cheese, egg, salt and pepper and mix with a large spoon until combined.

3. Add the chopped parsley to the filling mixture, and stir to combine.

4. Add the chopped spinach and stir to combine. It is best to break up the spinach before you add it to the filling. It will incorporate better this way.

5. Cover the bowl with plastic wrap and place bowl in the refrigerator, while you roll out your pasta.

STORAGE
Keeps for a day or two refrigerated.

STEP III: ROLL OUT THE PASTA DOUGH
1. Remove the bowl or plastic wrap that was covering the pasta dough.
Cut the pasta dough, using a bench scraper or knife, into 8 equal parts. Make sure you cut straight down.

2. Taking one piece at a time, flatten the pasta dough a bit, with your hand, so it will be easier to roll.

Place the dough portions under the bowl again or loosely cover with plastic wrap, so they won't dry out.

3. Take one portion of dough to work on at a time. Sprinkle it lightly with flour, and begin to roll it out.

4. Take your portion of dough and put it through the pasta machine on setting 1. Most pasta machines are numbered from 1 through 7, number 1, being the widest setting.

5. Take the rolled pasta and fold it, like an envelope, into thirds.

Do this same procedure, on setting 1, folding every time, for three passes through the machine. This helps to knead the dough and makes a smoother finished product.

6. Move your dial to mark 2 and run the pasta through TWICE. Your pasta will start to be rolled thinner.

You may have to rub your dough with flour, to keep it from sticking. Just rub a little flour onto the surface of the dough, on both sides.

7. Continue to move the dial after setting 2, one mark at a time, to settings 3, 4 ,5 and 6. With each setting, do one pass with your dough through the roller, before you move on to the next setting and repeat. Your dough will be thin enough to use after you have rolled it through setting 6. When done with one dough piece, loosely cover with plastic wrap.

STEP IV: MAKE THE RAVIOLIS
I show you two methods of forming your raviolis.

Method 1: Forming raviolis from a sheet of dough
1. Sprinkle a large baking sheet with flour. Set aside.

2. Take your ravioli filling out of the refrigerator and stir it once or twice.

3. Take your first sheet of pasta and cut it in two equal pieces, lengthwise.

4. Place one heaping teaspoon of filling in the center of the dough, leaving one inch between each mound, as well as one-inch at either end.

5. Moisten your index finger with water, and go all around the mound of filling. This water will help the pasta dough to stick together.

6. Lift up the other 1/2 of the dough and press it down on one of the long sides first, and then in between each mound, making sure to press out as much air as possible.

7. Press all around the mounds of filling, to make sure you have a tight seal.

After the raviolis are cut, go around the edges of each, pressing, to make a tight seal.

9. Place your raviolis on the floured tray, while you roll out the rest. Cover tray with a clean kitchen towel, while you work.

Continue in the same manner, until you run out of filling.

Method 2: Forming Raviolis From Dough Rounds
Forming ravioli from pre-cut rounds is a little easier than forming them from sheets. You may prefer this method.

1. Cut rounds from your dough. I used a 3 inch plain cutter.

2. Make pairs of rounds on your work surface. Go around the edge of each one of the pair with a moistened finger.

3. Fill the moistened round with a heaping teaspoon of filling. Then cover the filling with the other round, pressing as you go around the circle. Be careful to squeeze out as much air as possible.

4. Take each round and squeeze around the edges, to insure a tight seal.

5. Take a slightly smaller cutter, I used a 2 1/2 inch fluted cutter, and cut the ravioli. This is optional, but it makes a prettier ravioli.

STORAGE
Finished ravioli could be kept for two days in the fridge, as long as they are sprinkled with flour, not overlapping(so they don't stick together) and covered with plastic.

You may freeze the raviolis on the tray by placing it directly into the freezer for a few hours. After they are frozen, remove the raviolis from the tray and place them in ziptop bags.
This will insure that they will not stick together.

Raviolis will keep frozen for a month or more. There is no need to thaw them before cooking.

STEP V: COOK THE RAVIOLIS
Fresh raviolis do not take very long to cook.
1. Cook in boiling salted water for about 6 minutes. After you add your raviolis and the water starts to boil again, adjust the heat so that it is GENTLY boiling. A rapid boil could make your ravioli come apart.

2. When they are close to being done, the ravioli will start to rise to the top of the pot. 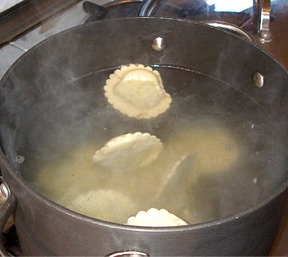 3. Carefully remove each ravioli with a slotted spoon or drain in a colander.

4. Serve with your favorite tomato sauce, and a sprinkling of cheese. They are also good with melted butter and grated cheese. You can sauté a little fresh sage and garlic in the butter, if you like.

STORAGE
Cooked raviolis keep for a day or so in the refrigerator, well covered. They do not freeze well.

EXTRA TIPS
KELLY SAYS: What to do with the Scraps!
While you are working, you will have lots of scraps of dough. Simply set them aside and cover the pile with plastic wrap while you are forming the rest of your raviolis.

1. When you are done making your raviolis, take your pile of scraps and knead it together, as best you can.

2. Put the dough through setting 1 of your pasta machine, folding in thirds as you go. It will take a while for the dough to come together, but it will!

3. Roll the pasta as described in STEP III: ROLL OUT THE PASTA DOUGH, Step 3 - 7; rolling the dough through the pasta machine from setting 1 to setting 6, as described, flouring the pasta dough sheet as necessary.

KELLY SAYS: How to Make Pasta!
1. After the pasta dough has been rolled through setting 6, you may make more ravioli, if you have filling left, or you may cut it into pasta, like I have done here.

2. Sprinkle pasta with a little flour and gently toss together. The flour will keep it from sticking together.

STORAGE
You may cook the pasta immediately, or you may put it in a zip top bag and place it in the freezer, to cook at a later date.

COOKING INSTRUCTIONS
Fresh pasta cooks very quickly. It should only take 3-4 minutes to cook, in a pan of boiling salted water.

Bakers and confectioners are partial to nutrient dense nuts because of their rich... Read More

Pears - How to Poach

MELTING CHOCOLATE is defined as using indirect heat to convert chocolate from a solid to a... Read More